Greater Minnesota city leaders to legislators: There’s still time for this to be a ‘do-something’ session

A printable, PDF version of this press release is available here.

Greater Minnesota city leaders to legislators: There’s still time for this to be a ‘do-something’ session 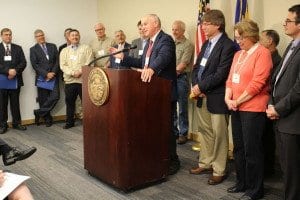 ST. PAUL—With looming concerns that 2016 could end up as a “do-nothing” session, city leaders from across Greater Minnesota held a press conference today to call on legislators to take action on key issues affecting communities across the state.

“There are less than two weeks left in the session, but we remain hopeful that our legislators will be able to put their differences aside and compromise for the good of our state,” said Robert Broeder, mayor of Le Sueur and president of the Coalition of Greater Minnesota Cities (CGMC). “I can tell you that the citizens in Greater Minnesota want results from our legislators and they won’t be satisfied if nothing gets done.”

While numerous bills that impact rural communities are still in play at the Legislature, Broeder said there are three main issues that must be addressed this year for the 2016 Legislative Session to be considered a success for Greater Minnesota: an increase in Local Government Aid (LGA), a bonding bill that includes funding for clean water infrastructure grant and loan programs, and a transportation bill that includes funding for the Corridors of Commerce program and city streets.

“For the past two years, the top priority for Greater Minnesota cities has been to increase LGA funding back to its 2002 level,” Broeder said, noting that the Senate tax bill, which is currently awaiting action in the conference committee, would accomplish this by increasing the appropriation for LGA by $45.5 million.

“The Legislature pressed pause on our hopes for an LGA increase when the tax bill fizzled last year,” Broeder said. “If they go another year without addressing LGA, the result for many communities will be higher property taxes and reduced services.”

Another issue that affects many communities in Greater Minnesota is the bonding bill. In addition to numerous funding requests from individual communities, city leaders say a successful bonding bill must include provisions to fund clean water infrastructure grant and loan programs.

“The most critical issue in the bonding bill is funding for clean water infrastructure,” said Alexandria Mayor Sara Carlson. “Aging infrastructure combined with new water quality regulations means cities across the state are being forced to upgrade their facilities or build new ones altogether.”

Carlson continued, “Cities can’t put off making required repairs and upgrades, but the high costs are a big financial burden. Without funding from the state, water and wastewater rates for businesses and homeowners will skyrocket.”

Transportation has also been a major concern for Greater Minnesota cities for years. As it becomes one of the main focal points of the session, city officials are urging legislators to remember the needs of rural communities as they continue negotiations.

“If there is one issue that unites mayors from all parts of the state and all political persuasions, it’s transportation,” said Granite Falls Mayor Dave Smiglewski. “We all want the Legislature to get serious about addressing Greater Minnesota’s transportation needs. To do that, any transportation package they pass must include significant funding for the Corridors of Commerce program and city streets.”

As the session winds down, the city leaders said they plan to be in frequent contact with their local legislators and other key lawmakers to encourage them to take action on key Greater Minnesota priorities.

“We expect legislators to stand up for Greater Minnesota by supporting funding for LGA, transportation and clean water infrastructure,” Smiglewski said. “The days are winding down, but there is still plenty of time for this to be a ‘do-something’ session.”